​Our Mission is to proclaim the Good News of the Gospel and to seek and serve Christ in all people.
St. John's Episcopal Church Mission Statement, January 2019
​

Michael Drinkwater was born and raised in Pensacola, Florida.  He first came to the Episcopal Church as a teenager in Gulf Breeze, Florida when his family began to attend St. Francis of Assisi Episcopal Church.  He has fond memories of the people at St. Francis.  The welcome they showed him as a newcomer continues to influence his ministry.

Michael first started working for the church when he joined the Bishop’s staff in 2008 as Coordinator for Youth Ministries for the Diocese of the Central Gulf Coast, a post he held while completing his Bachelor’s in Business Administration at the University of West Florida.  In August of 2009, Michael left on a new adventure to attend the General Seminary of the Episcopal Church in Manhattan, where he was recognized as the Robert C. Dentan scholar for excellence in Old Testament and Hebrew Studies.

Following his graduation in 2012, Michael accepted a position at the Cathedral of St. John in Albuquerque, New Mexico, where he served as Canon for Outreach and Formation for over 6 years.  He left in 2018 to complete his Master’s degree in Linguistics at the University of New Mexico.

Michael Drinkwater accepted the call to be the next Rector of St. John’s Episcopal Church in Alamogordo in May of 2019.  He looks forward to spending the next phase of his life serving his new parish and the community of Alamogordo. 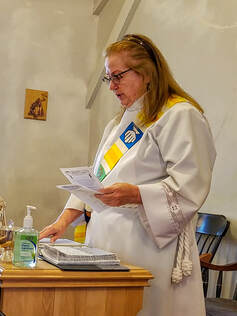 Offering prayers of the people
​

​   The Rev. Deacon Aileen Pallister-Walther came to Alamogordo from Orlando, FL just over a year ago. She served Episcopal Church of the Resurrection and three other churches while in Florida. Her outreach ministry included founding the Center for Christan Women's Spirituality and its support for women dealing with domestic violence and homelessness. The Center also published booklets on women in the Bible and journal writing as well as sponsoring spiritual retreats. She also taught world religions at Valencia College.

Currently she leads an ecumenical prayer and support group for women at St. John's. She is working on her thesis on the spirituality of Richard Hooker for Graduate Theological Foundation.

She is delighted to be at St. John's and be of service to the church and community in Alamogordo.

St. John's is overseen by a Vestry that works with the priest to manage our parish. Current members of the vestry are:  Senior Warden Randy Burroughs, Junior Warden Ann Bagby,  Members:  Susan Schultz, Roy Benavides, and Kim Buie. The vestry works as the board of directors of the parish. They approve and oversee all budgetary matters, the building and grounds of the parish, oversee all contractual matters, and must approve all purchases of significance. Vestry members are elected at the annual parish meeting in January.  Most members accept responsibility for being a liaison to parish outreach programs such as the day school and the community kitchen.
​ 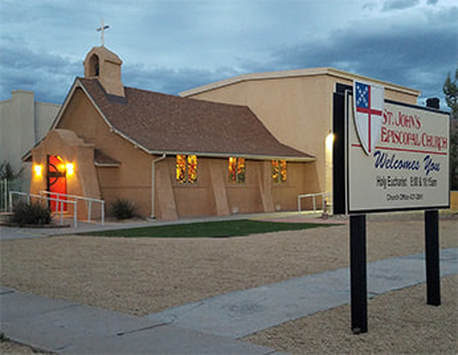 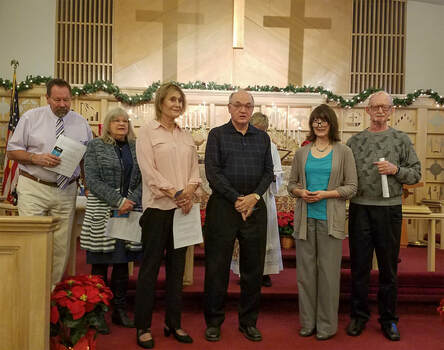